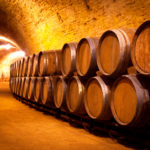 Oak aging is a very hot topic these days. Depending on your point of view, and taste buds, its either a very, very good thing or a very, very bad thing. Both outlooks are problematic and fraught with misconceptions and outright lies. Within taking sides on the issue, let me try to explain…

Oak barrels were initially used to store and transport wines because they were…available. Barrels were used to store and transport everything…flour, nails, fish. Oak was used because of the preponderance of oak forests in central Europe. (chestnut was used in northern Italy, palm in the Middle East). Oak offered other advantages as well…it was bendable (using heat), water tight, yet porous. Wines spending time in oak barrel loose some liquid to evaporation (the angel’s share, it was called) leaving the remaining wine more concentrated. During aging, various soluble oak components diffuse into the wine and enhance the intensity and complexity of wine flavors. And some oxygen passes into the wine, softening the tannins. (It’s important to note that some interaction between the wine and oxygen during the winemaking process is beneficial, for that reason oak, as well as concrete, vats are used.)

The arguments are generally about how oak may affect the flavor of the wine. Largely, this revolves around four variables;

Many, many people absolutely delight in the flavors that oak aging imparts on wine. To some, the toffee, caramel, smokey, woody and vanilla flavors imported by oak are integral to their wine enjoyment. For this reason, some wineries don’t really ‘age’ their wines in oak barrels, but rather add oak chips, or oak powders or put oak boards into the wine. This process is much less expensive than actually aging the wine in barrel. Prior to 2006, the practice was outlawed in the European Union. Its always been legal in the US, Australia, South American and nearly everywhere else.  I think its cheating.

Wines that spend time in large, old, Old World sourced oak barrels see the positive effects of barrel aging without imparting of much (or any) flavoring. Its for this reason that there exists an assumption that many French wines (like Chardonnay from Burgundy) don’t see any oak. The clear answer to that is…it depends. Typically, Chardonnay from Chablis sees little or no oak (or they age in large, previously used barrels). Likewise, wines from the warmer, southern end of Burgundy, may or may not spend time in barrel. This could be an economic as well as aesthetic issue, as these wines are often earlier to market and less expensive than the famed wines from Montrachet and Meursault. Which, by and large, do spend considerable time in oak barrels.

Red wines may or may not spend time in oak barrels. Many do. Maybe even most. But its not automatic. Reds may or may not spend time in large or small, new or used, American white oak or French red oak. There are no rules. This is a decision made in the vineyard and the winery and the factors are too myriad to list. Tradition is a factor. Economics, for sure (barrels are expensive, as is time and storage). Perhaps the most critical factor is the winemaker’s vision of the end result.

Aside from the taste, oak may or may not be complacent in ‘RWH’ (Red Wine Headache), an allergic reaction to something (or somethings) in red wine. It might be tannins. It could be histamines. Maybe alcohol. Its not sulfites, for sure. But, to be safe, since oak aging does impart tannins and histamines, then staying away from oak aged wines might allow you to steer clear of RWH. Maybe.

If you’ve been reading, more or less patiently, for my opinion on oak, I’m afraid that I’m going to disappoint. I’m not a huge fan of new American oak and its effects on wine. Except when I am. Sometimes the use of oak is jarringly unpleasant (or as I often describe wines, unlovely). Sometimes it’s just grand. It really depends on other factors. Context. Expectation. Type of wine. Ripeness of the grapes. Overall balance. And there it is. To me, the question of balance is most important. I don’t really want any singular aspect of the wine to dominate. I want fruit. And acidity. And tannins. And bouquet. Perhaps some sugar. And maybe oak. But not too much of any one thing. Those syrupy, fruit-laden, vanilla doused, campfire scented, high-scoring reds? Nope. Not for me. But, hey…if you like them, have at it.